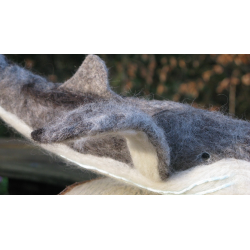 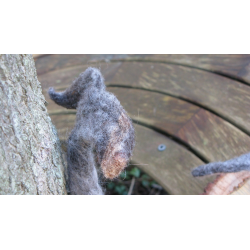 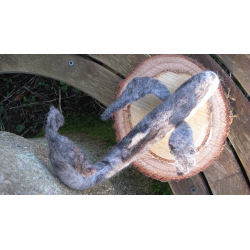 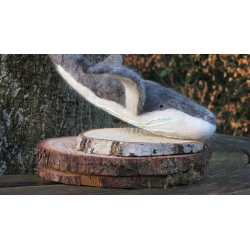 This is a grey and white woollen 3D Sculpture made by us - a Humpback Baleen Whale called Humphrey and made this Whale to highlight the effect of pollution in the sea on marine animals.

We called our Whale Humphrey because he did exist and needed our help.  Twice he deviated from his Mexico to Alaska migration by entering San Francisco Bay - behavior is unusual for a humpback whale and attracted wide media attention when entering the bay in both 1985 and 1990. Both of his bay incursions resulted in rescue by the Marine Mammal Center because he became trapped - the second time in a large Cargo net.


Our Whale was made for an Auction to raise funds for World Cetaceance Alliance in Brighton to raise awareness of Ghost Netting in the Sea. We bid on him ourselves. Our whale has an Ipad Display Stand and feels very soft as made from Merino and Finnish wool on a metal frame. It took us about a week and lots of wool to produce Humphrey - one of the biggest animals made by us, so far.

Our 'Humphrey' is now ready to go on the next leg of his journey and we hope perhaps he might continue to raise money in some way? Please contact us if you are interested in Humphrey but dont live in the UK - we can find out how much the postage would be and get back to you.

We will donate a third of the product price of Humphrey to World Cetaceance Alliance when he is sold.

Not only do Humpback Whales get caught up in Cargo netting but also, like all Marine animals, are effected by the small microbeads that make their way into the sea from the products we use - brushing your teeth or exfoliating. Ocean Pollution from microbeeds can amount to - 8 Trillion Microbeads a Day from US. Microbeads act like sponges for toxins already found in local waters and sewage plants that wind up in our waters. http://www.natureworldnews.com/articles/16829/20150925/ocean-pollution-8-trillion-microbeads-day-alone.htm

Honey Beeswax are a small family run business dedicated to delivering, high quality,  handmade gifts from the UK, Europe and around the World.

Welcome to our list of brands that we love to sell and where you'll find the products from these companies that we think are very special and love to feature at Honey Beeswax.